Classical's Relationship With Chick-fil-A: A Tough Sandwich to Swallow 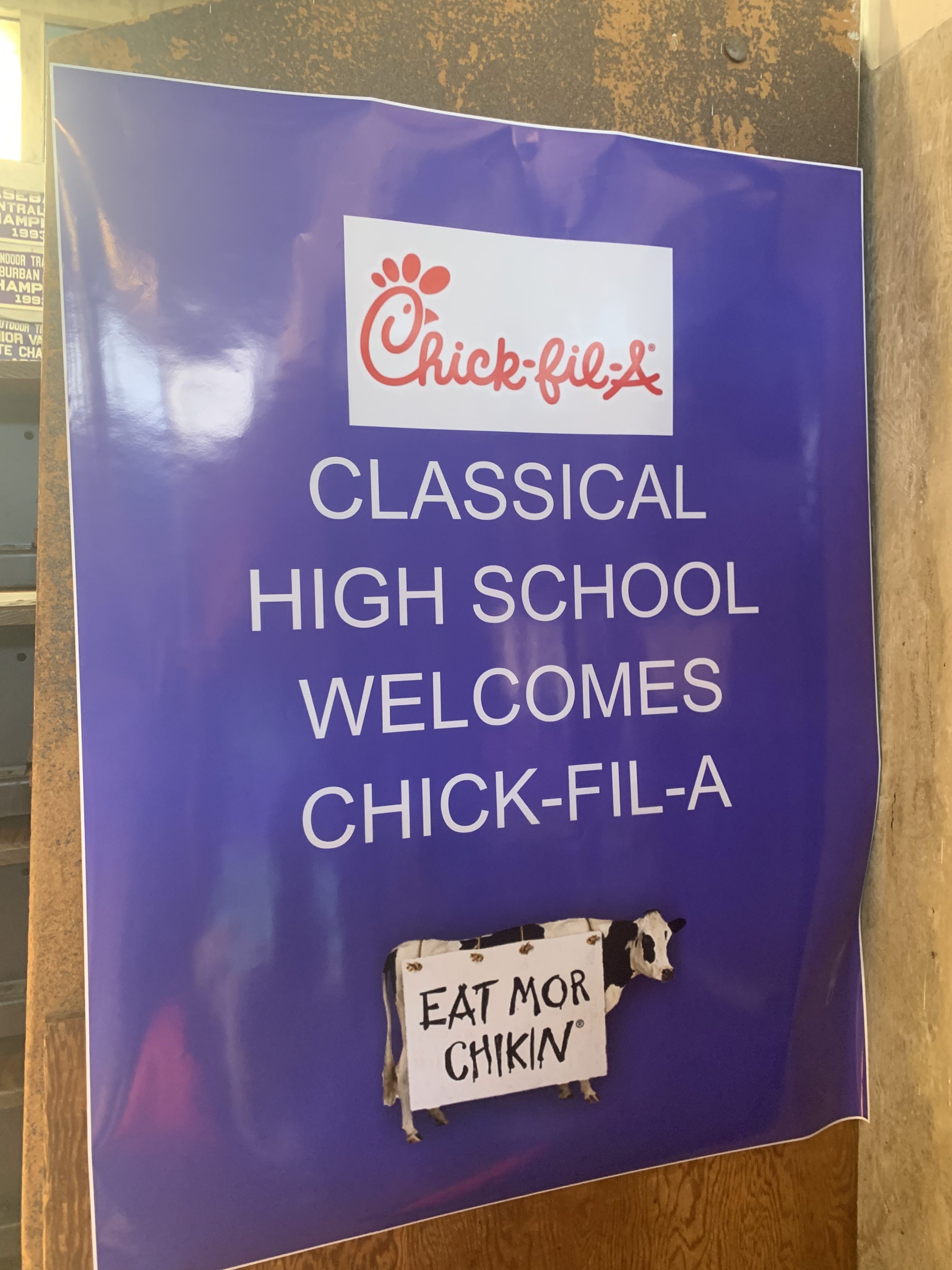 A Chick-fil-A Poster hanging in the entrance to the main gymnasium.

Recently, Classical High School put up a poster, since taken down, that read, “Classical High School Welcomes Chick-fil-A.” This was to advertise a sponsorship contract with the basketball league that the school is a part of. For those unaware of the issue, the fast-food franchise has a sordid history with bigoted groups, ideas, and proponents of those ideas. Considering this, the best thing for Classical to do is cut ties with the company. Collaborating with a corporation that uses its power to discriminate against members of the LGBTQ+ community degrades the moral integrity of the school and, subsequently, its students.

A member of the faculty, when asked about the issue, defended Classical’s decision by comparing the sponsorship to the school’s relationship to Sodexo, a catering company that provides breakfast and lunches for students. This, however, makes the issue no less deserving of criticism as Sodexo runs private prisons in other countries. Given this information, that makes not just one, but two companies with controversial business practices that Classical is involved with. Two wrongs do not make a right.

“I think we are inviting God’s judgment on our nation when we shake our fist at Him and say, ‘We know better than you as to what constitutes a marriage.’ I pray God’s mercy on our generation that has such a prideful, arrogant attitude to think that we have the audacity to define what marriage is about.”

Classical’s association with a franchise whose CEO espouses such harmful beliefs is worsened by the fact that Classical itself has many students who are members of or friends or family of those in the queer community.

Aside from the company’s CEO’s controversial opinions, there is a second worrying aspect of the franchise that makes its relationship with Classical even more concerning. That is their support of organizations that have proclaimed their opposition to LGBTQ+ rights and actively engage in anti-LGBTQ+ action and propaganda. These include the Salvation Army, Fellowship of Christian Athletes, and Exodus International. All three groups have a history of homophobic actions like opposing marriage rights and endorsing anti-LGBTQ+ statements. The FCA in particular has published statements against gay people in their sexual purity statements, which they require student leaders in their organization to sign. Furthermore, Exodus International was involved in a controversy a while back over a “gay cure app,” which, as the name suggests, was an app that advocated for a “gay cure.” The fast-food franchise has previously donated to these organizations, further complicating its association with Classical. Despite the company promising to cease donations to these organizations, the CEO still donates and is connected to multiple anti-LGBTQ+ organizations.

This reporter reached out to a couple of LGBTQ+ students to get their perspectives on the school’s relationship with Chick-fil-A. Emma Jewett perfectly summed up the issue:

“As a public high school, Classical has a duty to its students. It must give us an education, it must help us grow into adults, but first and foremost it must protect us. Throughout my high school career, Classical has failed, again and again, to meet these basic requirements. When white students share racist photos or videos of themselves, they are protected, while the Black and brown students who call them out are punished. When the school admin chooses to take a sponsorship from Chick-fil-A, a corporation notorious for donating to anti-queer organizations and in supporting conversion therapy, just so they can afford a new LED screen for the gym, they prioritize their vanity over the safety of queer youth. This, coming from the same administration that calls the gender neutral bathroom the ‘trans bathroom,’ shows us again that they do not care for their queer students.”

A theme that Jewett hits on particularly well is that of responsibility. Classical, as a public high school, does have a responsibility to its students, particularly in this case, those who belong to the queer community. Providence Schools’ official discrimination policy is that “The Providence School Board is committed to the principles of Affirmative Action and Equal Employment Opportunity and to compliance with all Federal, State and City regulations that prohibit discrimination on the basis of race, color, sex, sexual orientation, religion, age, gender identity or expression, national origin, disability, covered veteran status, and any other protected classifications.” As Jewett points out, it has fallen short of this responsibility many times. Furthermore, regarding her point about Classical’s duty to its students and its subsequent failure, the Classical Handbook provides a better criticism than anyone else could. In the section labeled ‘Core Beliefs and Values,’ it states, “our school must be flexible and accountable to its learning community and committed to a process of self-evaluation, reflection and change.” The school betrays its “Core Beliefs and Values” by willingly associating with a franchise like Chick-fil-A, and worsens it by attempting to sweep the transgression under the rug, forsaking its belief in “self-evaluation, reflection and change.”

To further elaborate the impact of Classical choosing to associate with a franchise like Chick-fil-A, here’s a quote from another queer student, Adrian Perreault:

“Knowing the stuff Chick-fil-A does to hurt the LGBTQ+ community and then finding out ‘Classical Welcomes Chick-fil-A,’ I felt disgusted and uneasy and even a bit uncomfortable.”

As stated before, Classical is placed in an even more compromising position by accepting a sponsorship from Chick-fil-A, given its student demographic which is made up of many queer students. The school does a disservice to students like Perreault by associating with an organization that is known for bigoted behavior towards the same children that walk the halls.

Why would a school like Classical, with such a diverse student population, associate with such a franchise? It is unlikely the school administration accepted the sponsorship out of malice towards its many queer students. The sponsorship does offer some benefits for schools and athletes. A school being provided with financial support that could help its athletes is, in many ways, a good thing. Such a good thing in fact, that turning a blind eye to the source’s plethora of red flags might seem worth it. While this puts Classical’s decision in context, it by no means excuses its actions. There is still the uncomfortable truth that Classical entered a contract with a franchise that actively supports efforts to marginalize its queer students. Regarding the aforementioned likely lack of malice that informed Classical’s decision, it is still obvious that if anything, it came from a place of ignorance. Ignorance still does not serve as an excuse. As a school that hosts so many queer students, is it not Classical’s duty to be educated on issues such as these? Ignorance is barely a leg to stand on with the magnitude of information available today.

Those opposed to Classical cutting ties with Chick-fil-A might say that business should remain business and what a company does outside of the context of Classical is not important. Or what do the hurt feelings of a few queer kids matter at the end of the day? Additionally, if the contract is mutually beneficial, is it really that much of a problem if Chick-fil-A donates to anti-LGBTQ+ organizations? Complaining about it won’t change much. In regard to this, not only does it set a bad precedent for the future, but also Classical, as a school with a diverse student body, has responsibilities which include ensuring that all students feel accepted and heard at the school. This decision did not reflect that. At the very least, it displayed a disregard for the feelings of queer students. Or if they were considered, their opinions were not deemed important enough.

Due to Chick-fil-A’s history of support for anti-LGBTQ+ ideas and organizations, Classical’s association with them should cease. It is insensitive to its many queer students and sets a bad precedent for the school going forward. It is the responsibility of Classical, as a school that hosts a student body with a multiplicity of backgrounds and identities, to be more conscious of its decisions and how it could reflect its values to the students. Classical has made efforts in the past to convey its belief in diversity and acceptance so it’s time to put its money where its mouth is and truly embody that ideal.