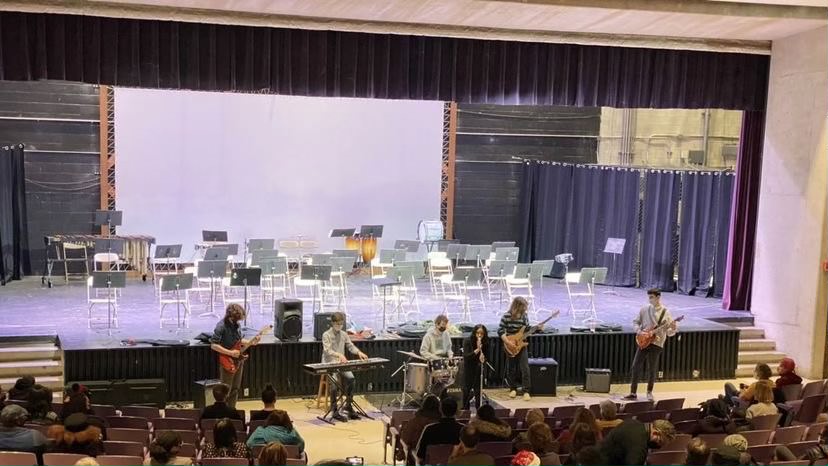 The jazz and concert bands are back! On Wednesday, December 15th, the two bands performed for the first time since 2019. They’ve been working for over two months for this performance, and it paid off. Their hard work was heard in the impressive music they played. At the concert were family, friends, Classical alumni, and enthusiastic peers, as well as many proud parents, who were excited to see their children perform on stage.

The first half of the concert was performed by the jazz band. The six members gave a powerful start to the show, performing seven different songs, each played confidently. In every song one could focus on the different musicians, hearing their significant contributions. Each of their solos had enthusiasm that demonstrated their strong dedication. The guitar and bass players (Jordan Woda, Ben Owen and Owen Kilcline) played dramatic riffs and the keyboardist (Lucas Hurtado Solberg) and drummer (Vaughn Traynor) brought it all together. The band’s singer, Krystal Morales, sang with a mix of strength and fragility that made the songs memorable. Her voice was able to show a lot of emotion, making the lyrics that said meaningful things even more special. In most of the songs they performed, the original singers are male, so having a female singer perform was really interesting.

In their version of Creep by Radiohead, the Woda, Owen, and Kilcline strummed their instruments powerfully, and Morales’s voice was able to match their weightiness, sounding as if the instruments and her voice were one. This song is really connected to the teenage experience, making these Classical students’ rendition particularly meaningful.

The jazz band played Bob Marley’s “One Love’’ and a bossa nova tune but played them like a classic rock band. At the end of their performance, one could feel the proudness and amazement of the crowd. It was refreshing to hear this music because it was live, which is an experience that one does not often get to enjoy. The jazz band worked very well together and it was fun to watch them perform.

After the short intermission, the concert band began their performance. They were a much bigger group than the jazz band, with more than thirty members. This was a challenging performance to do with so many people in the band, but they were able to bring out their spirit. Their group showed a genuine representation of Classical, and they had a variety of instruments. The many clarinet, flute and saxophone players were able to work well together and the violinists helped the music become even more melodic. The woodwind and horn players adjusted to mask mandates by making a slit through their masks to place their instrument through. The french horn, trumpet, tuba and trombone players all gave power to the songs and kept up well together. The percussionists were particularly upbeat.

The concert band also performed seven songs, but these were more festive and holiday related. It really reminded everyone that it’s wintertime and the holidays are coming. The concert band performed Silver Bells and other Christmas songs which were tunes that everyone knew, creating a sense of connection. They played Hanukkah Is Here, which the whole band performed exceptionally. They also performed the African Bell Carols, which was a beautiful song. It was really nice to hear songs of different religions and backgrounds.

Throughout the concert band’s performance, members of the audience were nodding their heads, tapping their feet, and even clapping along to the rhythm.

The winter concert was a great experience. It really displayed the talent at Classical and how many people enjoy music. In the last song there was a loud horn, an even louder wooden clapper, and a member of the band who put on a horse mask! Everyone was really happy, and this performance brought the musicians and audience together. It was an exciting and fun concert that showed what is yet to come! Congratulations to the jazz and concert bands for this amazing performance!