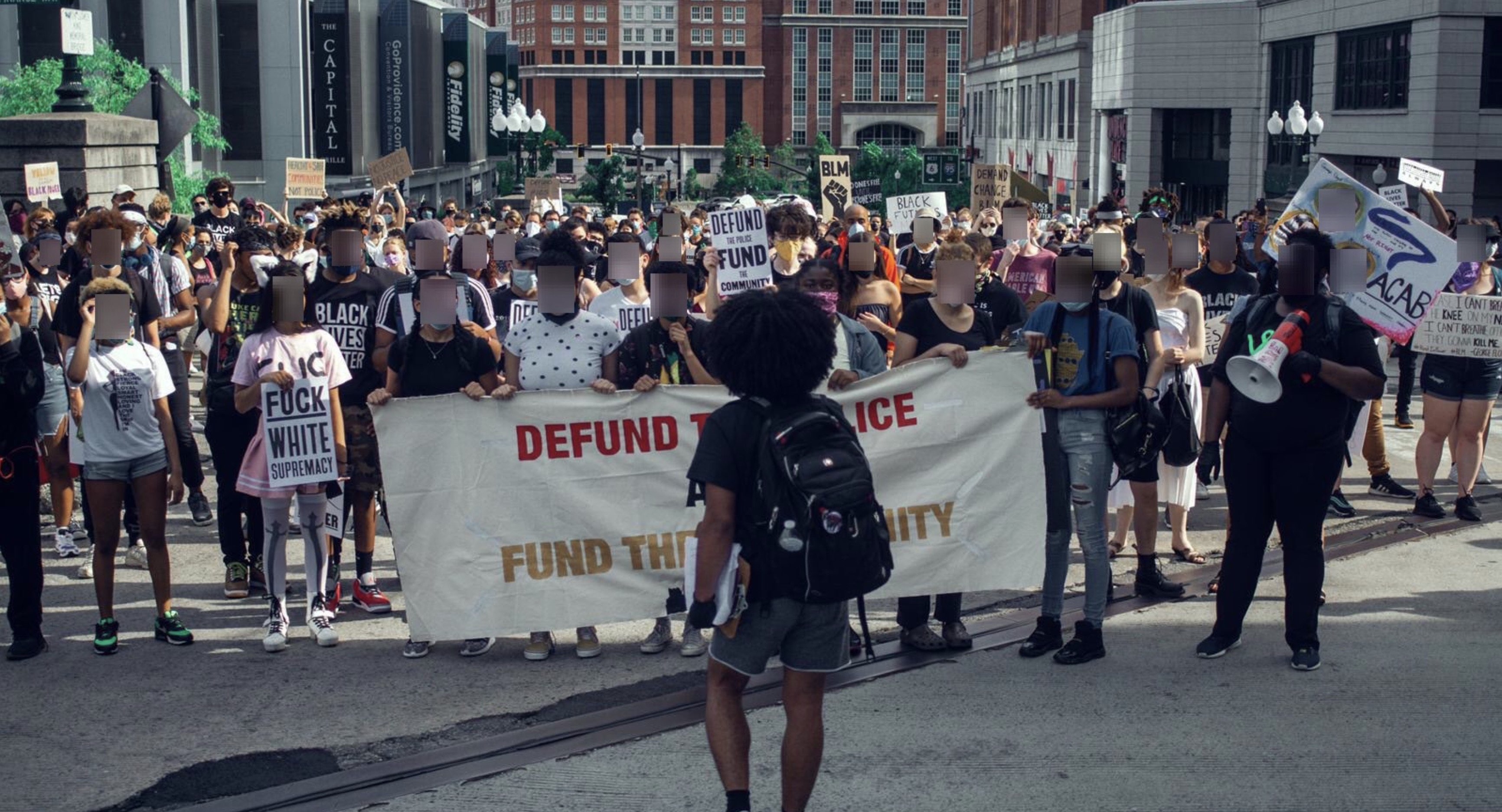 Student activists at a Juneteenth march in downtown Providence call for replacing cops with counselors. (Picture by @lennoxorellana)

Due to the recent murder of George Floyd, many Black Lives Matter activists have been calling for districts across the country to remove school resource officers (SROs) from their schools, replacing them with guidance counselors and student support staff. A couple weeks ago, however, Mayor Jorge Elorza fired, amongst other district employees, culture coordinators, whose jobs originated in 2017, and whose purpose was to help students without violence. As districts across the country begin to rethink and remove SROs, Providence continues to fire counselors instead.

State legislators and district officials often portray SROs as “good guys with guns” who protect children in the horrific event of a school shooting. But their job is mainly to police students. They patrol school grounds, record, resolve, and prevent disputes between students, and conduct searches. Many schools have pointed out that school shootings have not decreased in likelihood because of SROs, nor has their presence generally protected against shootings. During the 2018 shooting at Marjory Stoneman Douglas High School in Parkland, Florida, an SRO was on campus but did not protect the lives of any of the seventeen victims. Defenders of SROs also say that, despite having no training as counselors, SROs can serve as an additional school counselor who can help students with their personal problems. However, having these officers in school often worries and scares students, particularly students of color. At their core, SROs are police officers. They belong to a racist criminal justice system, and represent generational trauma to communities of color, particularly African American communities. Many studies point to SROs as a cause for institutional racism in schools, and instances of explicit racism by SROs are not uncommon.

For example, in Portland, Oregon, a district which recently decided to remove SROs from schools, a student of color complained that a SRO stopped her on her way to the bathroom for not having a hall pass, ignoring four white students doing the same thing. The SRO then escorted her to the bathroom, waited for her to finish, and then escorted her back to class, all while maintaining a firm grip on his gun.

In Covington, Georgia, in 2018, video footage showed an SRO slamming fourteen year old Asah Glenn against a brick wall, pinning him to the floor, and choking him for stealing an 85¢ candy bar. Glenn’s lawyer described the violence as “an excessive use of force where a minor incident was made into a violent and unnecessary encounter.” At the time Glenn’s family was interviewed, the SRO involved had only been reassigned while a state agency investigated whether his behavior was appropriate. Asah Glenn still faced charges of theft for stealing the candy bar.

In Louisiana, in 2018, a video showed school resource officer Anthony Durpe put an unnamed fourteen year old student into a headlock and slammed him onto the ground twice. Then Officer Cipriano entered, put the student in handcuffs, stood him up, slammed his face into a desk, and pushed him out the door. Durpe claimed that the student was aggressive toward him and reached for his weapon during the fight. A leaked video showing the incident revealed nothing of the sort, only the blows he and Officer Cipriano dealt to the kid. The officers’ grand jury indictment was described by the student’s family as a “slap on the wrist.”

While Angélica Infante-Green, the district commissioner, may assert that “the presence of School Resource Officers in schools can be a positive experience that allows our students to build a relationship and trust with law enforcement,” school resource officers seem only to make law enforcement’s reputation worse. Additionally, if police officers want to have a better reputation, being more reputable would be a better place to start.

But despite these problems, SROs were not cut from the budget. Culture coordinators were.

The purpose of culture coordinators was to raise morale and to help students focus on their studies without handcuffs and a pistol. Carina Monge, who was hired as a culture coordinator in Esek Hopkins Middle School in 2018, encouraged students to exercise during their lunch period, noticing that middle schools no longer had any designated recess. When a group of students expressed interest in starting an LGBTQ club, Monge helped those students start a club and found them an advisor, music teacher Marilyn Russo. Monge also helped parents with limited English communicate with their schools’ teachers and administrators.

It is important to note that Monge, despite providing a well-needed resource to Esek Hopkins Middle School, often brought in Patrolman Taylor Britto as a guest speaker, who carried a taser and spoke to students about their personal problems. While it is difficult to measure whether Officer Britto’s appearances had a positive or negative impact, inviting an officer to speak to students is not the same as hiring an officer to police students, and does not have the same ramifications. For instance, as an off-duty volunteer at the school, Officer Britto would get charged with assault if he assaulted a student, but as an SRO he would be unlikely to be charged or even fired.

Beyond anecdotal talk of Carina Monge, there is ample statistical evidence of students responding well to counselors. The American School Counselor Association (ASCA) collected over 25 recent studies from reputable sources, which all indicated that guidance counselors can and have actually helped students. These studies indicate that a proportionate number of counselors can combat racism in schools both on a cultural and an institutional level, positively impact academic and social habits of students in all grade levels, and actively reduce misbehavior.

Providence students deserve better than this. Our district is on its knees begging for answers to how to fix itself. But despite the vast majority of data indicating that cops are bad and counselors are good for students of color, despite a national movement against SROs, and despite constant pressure from students, teachers, parents, counselors, experts, administrators, and activists, the district has yet again failed to take its first step, and instead walked backwards. It was a shameful and bad decision. Fix it.

Want to see which school districts that have considered removing School Resource Officers (SROs) so far? Check out this map or scroll down!.