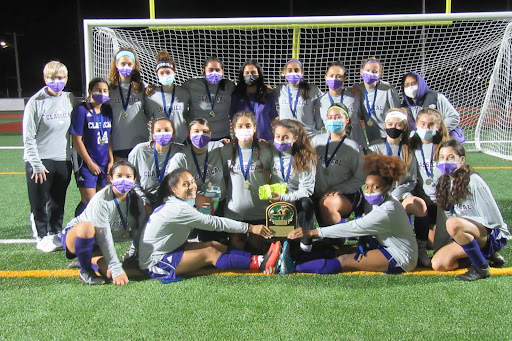 The Classical Girls Soccer Team is more than just a group of eleven girls who chase a ball around the turf for 80 minutes. The Classical Girls Soccer Team is more than our 3-10-1 record. Faced with many new obstacles this year (it is our first season in Division II and our head coach has been absent due to health reasons), it is natural that we are off to a sluggish start. In our most recent games, the Purple have shown significant technical and tactical improvement and are beginning to play more cohesively. The team experienced this turning point at a crucial time in the season.

Down two at the beginning of the second half of our eighth game against Middletown, there seemed to be a complete change in the attitude of the team after halftime. All of a sudden, we began to play as one interconnected unit and dominated the second half. It felt refreshing to finally play at the higher level everyone knew we were capable of, and we were all excited to embrace our new style of play. Although the game ended 2-0 with a victory for Middletown, it was clear after that half that we were now a new team no longer lacking confidence or passion. This energy carried into our next daunting challenge, against the second-seeded team in the division, Moses Brown, where we were able to hold them scoreless the entire first half. During the first half of this game, the Purple defense composed of senior Juliette Labrecque, freshman Sophie Baldwin, junior Carolyn Myrus, and junior Anaya Stephens locked down the Quakers’ talented strikers. In the midfield, sophomore Carolina Battle, sophomore Grace Doyle, senior Eva Matos, and senior Chelsea Tay gave their all and connected numerous stellar passes to the forwards seniors Baneza Mendoza and Michaela White. Our goalkeeper, senior Sylvia Vileno, also had an amazing game in which she saved a crucial penalty kick at the beginning of the second half.

Our newly acquired drive can be attributed to the fundamental change in our playing formation that Coach Cafferty suggested we make. In prior games, there was a clear lack of connection and ball possession because the 4-3-3 (four defenders, three midfielders, and three attackers) formation was not working for us. Our change to a 4-4-2 has made all the difference, now allowing the Purple to dominate the midfield and make dangerous plays on the offensive. We were able to do just that many times in our 10-0 victory over Woonsocket. One of the goals from this game was a clear example of perfect connection through a 4-4-2 formation. Beginning with Juliette’s powerful goal kick that brought the ball all the way to Carolina in the midfield, Michaela, up top, was able to make a run and find the ball and then a clear shot to tack on another goal for the Purple.

All in all, noticing that certain things don’t work for us as a team and therefore adjusting to make the most of everyone’s individual talent was a missing tactical factor that we have now acknowledged and been able to capitalize on. Our mid-season game against North Providence, which ended in a draw, marked the beginning of our comeback and put the team back on the road to the playoffs. It will take a bit of luck, in terms of other team’s performances, and a tremendous effort by the Purple to qualify for the Division II playoffs, but with a victory in all 3 of our remaining games it is still possible to qualify. If anyone is capable of this remarkable comeback, it is the Classical Girls Soccer Team.

Come support us at our next must win home game against Ponaganset on Wednesday, October 27th!