After a year off the stage, the Classical High School Theater Company performed ‘This is a Test’ on November 5th and 6th. The play is about Alan, (played by senior Jojo Collins, who also directed the production) who has to take a test that will determine his future. It is set in a classroom with black and white checkered desks and chair, (a well-thought out design by the stage manager, Anabelle Mei and stage crew Jacy Cherry, Phil Belleau, Michelle Ovalle, Isabel Sanchez and Malia Johnson), and all of Alan’s classmates either wear all black or all white (costume choices made by Zora Newman Greene and Joshua Schneider).

Shockingly and sometimes humorously, throughout the play there are three voices in Alan’s head that only the audience can see. Voice 1 (played by Mairama Bandabaila) wears a red dress with a heart shaped crown, Voice 2 (Ian LeFort) is in a pinstriped suit wearing bunny ears, and Voice 3 (Jaileen Vargas-Garcia) wears a blue dress and holds a teddy bear. These characters and the checkered classroom are all very reminiscent of Alice in Wonderland. This applies to the physical elements of the theater set, but also to the way the story unfolds. 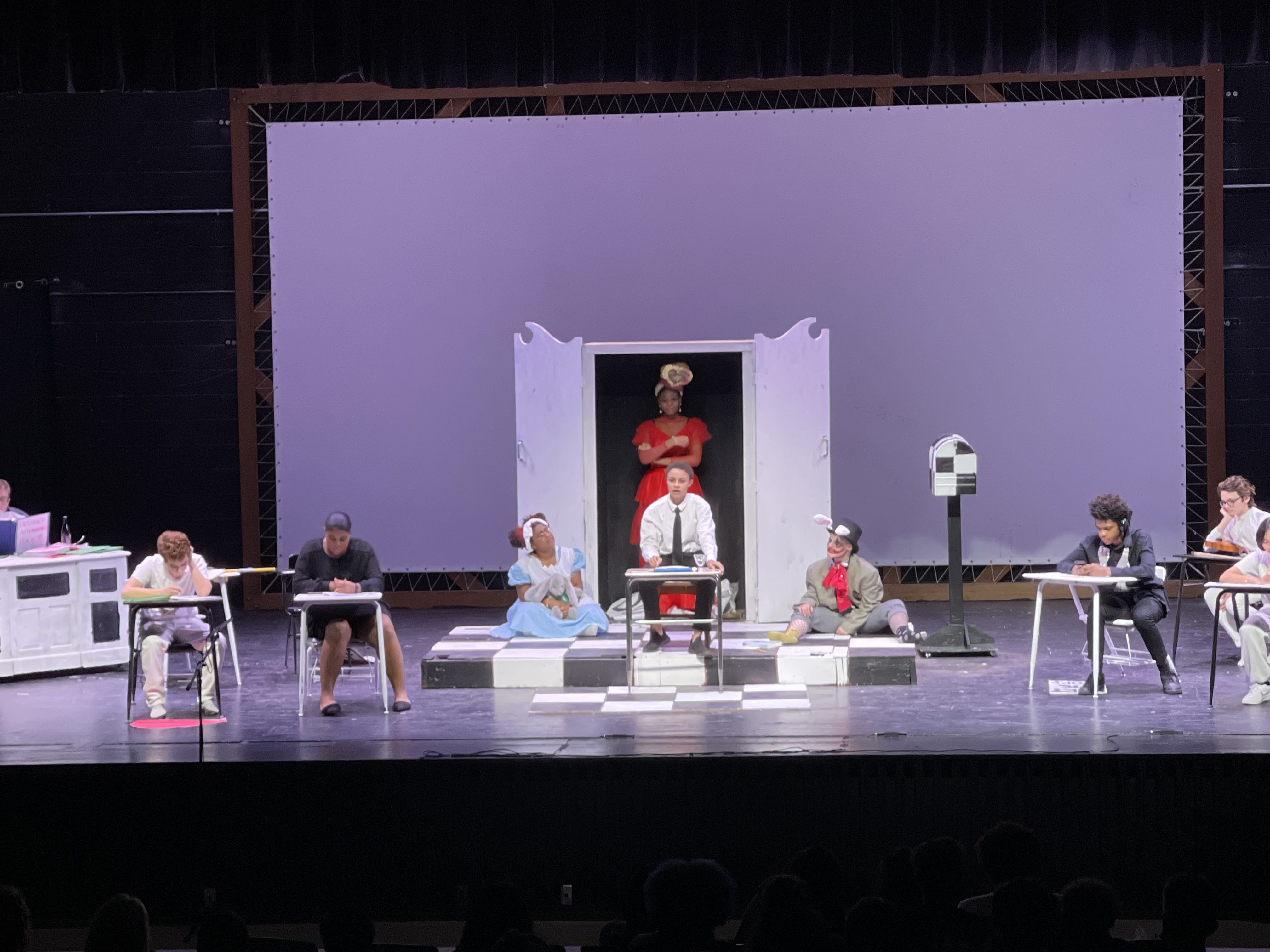 Once Alan begins the test, he starts to realize that the questions are a bit weird. They ask the strangest things that no one would be prepared for. But somehow, all his classmates are answering them easily. He gets overwhelmed and feels panicked. This is when the spotlights pan in on him and he is enveloped in a circle of light, one of the many well done decisions made by the lighting crew (Faith Folarin, Milo Schwartz and Marya Tesema). Throughout the show, the three voices speak and tell his thoughts, making him feel worse and confused, in fact antagonizing and tormenting him.

LeFort brings his character of Voice 2 to life, with wide gestures and exaggerated expressions. Along with Bandabaila as Voice 1 and Vargas-Garcia as Voice 3, they all work together to show the audience what Alan is feeling through their body language and movements. The lighting helps create almost two sets, one where the audience sees the whole classroom, and another where we are in Alan’s turbulent head. Over time, we realize that the play isn’t really about the test. It’s actually about Alan’s experience and consciousness, and the way his thoughts ebb and flow during this tense time. 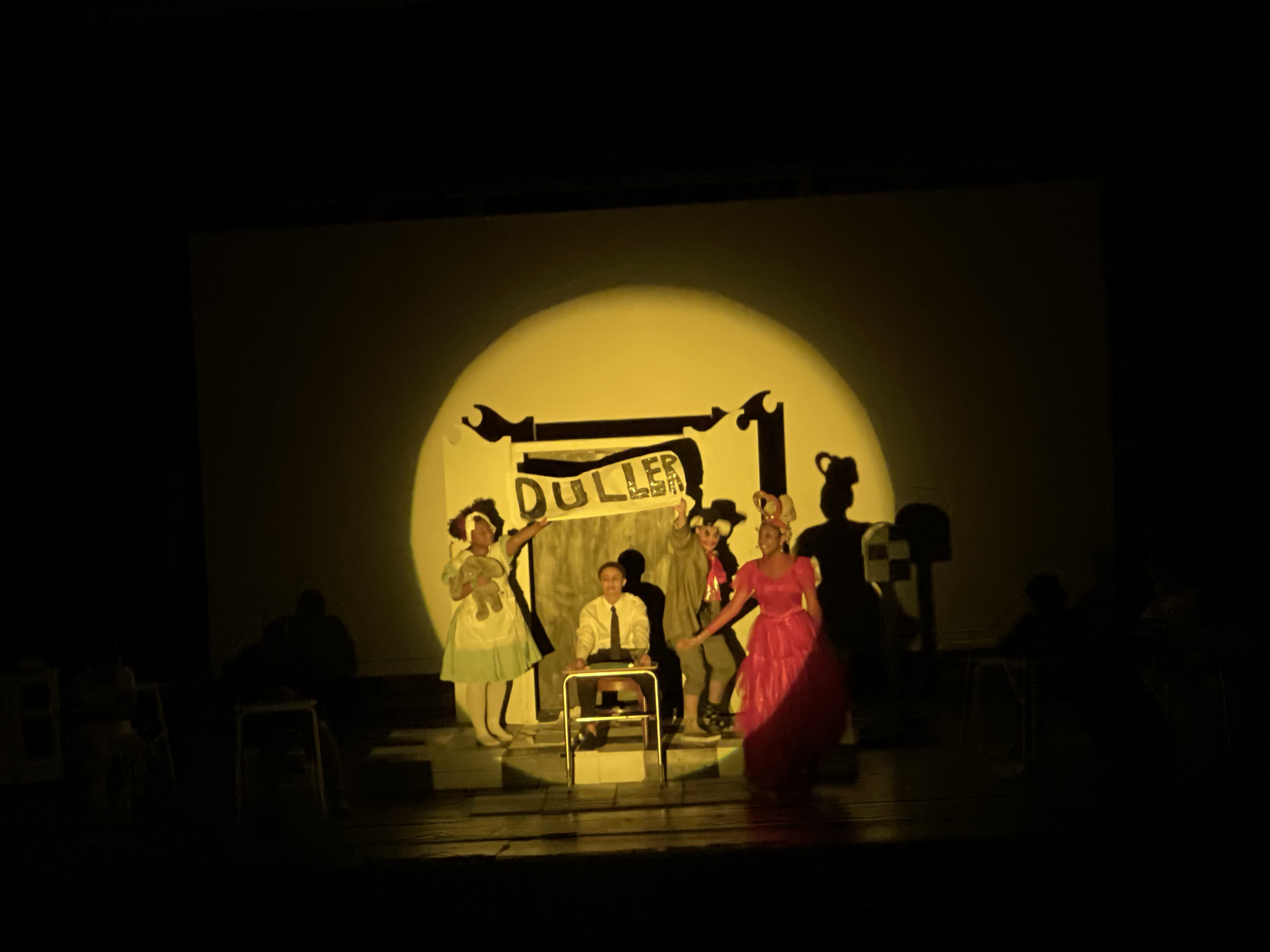 The spotlight on Alan indicates the setting is inside Alan’s head.

Alan’s classmates (played by Rania Johnson, Felix Leitner-Mittersinker, Aidan Sanders, Koli Suy, Marcus Tremblay and Julia Vincente Reynoso) are also key to the mood of the play. His classmate Lois, played skillfully by Rania Johnson, delivers minimal but punchy phrases. At first Alan and his classmates calmly take their test and the beginning of the play feels normal. But once Alan starts to get lost in his head, his classmates start giving answers to each other. They hold up posters with the solutions; in fact, they are random things with no connection to each other.

Things slowly start to escalate. The other students start singing and they are in unison, but this also creates a sort of chaos for Alan. The sound crew (Jeanette Barboza, Rose Sullivan, Magdiel Valenta, Layla Valenzuela and Oscar Vargas) helped with ensuring the audience could hear and gave power to all of the actors’ voices. There is even a moment when everyone except Alan starts speaking in Afrikaans, which further confuses Alan. The play uses repetition a lot, with the three voices exclaiming, “this is a test!”, “A what?”, “A test!”, “A what?”, “A test!”, “A what?!” This and other phrases are repeated, annoyingly. This recurring rhythm creates a sort of unity throughout the play, but it is also nagging and chaotic for both Alan and the audience.

This production of This is a Test raises some glaring questions about school, especially about test-taking and studying. Alan struggles and his teacher, Mr. Williams (James Ninneman) is of no help, shaming him and distracting him while he’s taking the test. Mr Williams also plays favorites with a violin-playing student, Evan (Felix Leitner-Mittersinker), and obviously dislikes Alan, which makes taking the test even more difficult for him. 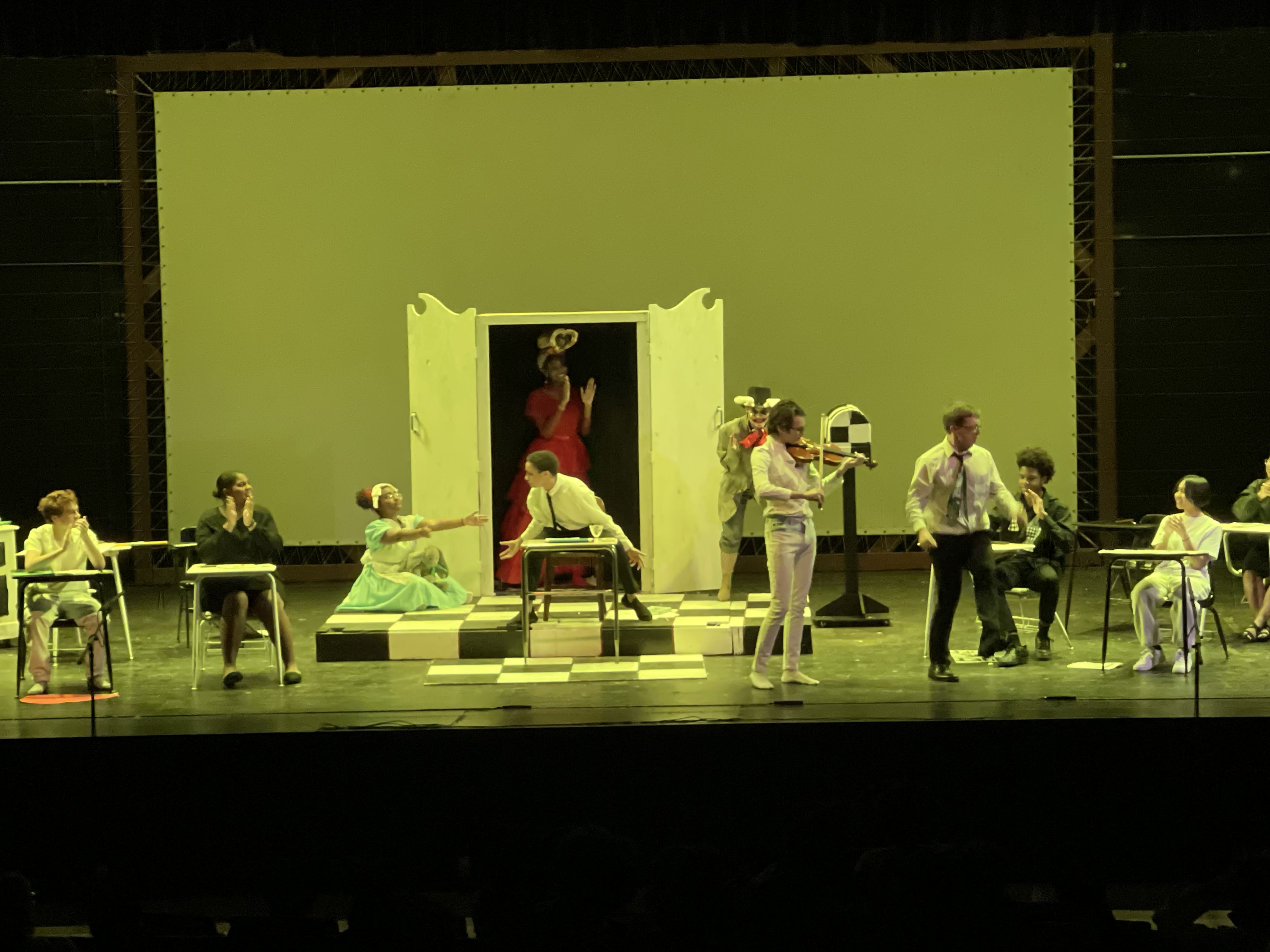 Ninneman takes on this role fervently, strutting across the set, placing his foot on Alan’s desk and throwing students’ tests in the air. When the audience is seeing into Alan’s mind, we also see him think back to the past as he studies and as his mind wanders. He questions if there will ever be romance in his life, what his future will look like, if he will make his parents proud and if he will fulfill his personal goals. These questions are ones my peers at Classical High School and I can relate to. It was meaningful to see them brought up and brought to life.

By the end of the play Alan came to some realizations about himself. Maybe he isn’t lost, maybe he can fulfill his goals despite being the odd one out. In the final moments, there is a twist. Alan wakes up, and it turns out this whole ordeal was a dream. Clearly, the title of the play has a double meaning. “This is a test” can literally mean that something is an exam or a quiz, but it can also mean it’s a drill, a practice, and that it isn’t the last chance. The title alludes to the fact that the test was actually not real. Even though the experience turned out to be imaginary, Alan learned about himself and grew, and that is the most important point. As an audience member and writer interpreting this production, I was impressed, moved, and provoked.